20-IN-1 Viaden Crazy Pack Slots HD: Give Your Luck a Try 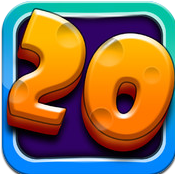 I recently heard about the world’s biggest Casino in Singapore, Marina Bay Hotel that is expected to attract the gamblers from all over the world and in turn bring a lot of money to Singapore. But I was amazed on how many “actual players” are left after these casino games have become a part of the app stores. They allow you to gamble as much as you want without risking a penny of yours. Also, the user experience is satisfying and many of them are available for free. But in case you are adventurous and want to actually risk your money, then there are many online websites which allow you to gamble in real cash. But limiting our current discussion to these casino apps, let’s take a look at the newly entered 20-In-1 Viaden Crazy Pack Slots HD and check out if it can sustain the building competition or not.

This slots app has been designed and developed by Viaden Games and I haven’t heard of them before, so this might be their first app in the store. The app is compatible with iPhone, iPod touch and iPad and requires iOS 4.3 or later version of the OS. The first look of the app is promising and I think it’s a good start for the developer. But still there are some key points and specs missing that they might need to cover for the next time.

The app is a pack of 20 slot machines including Charming Chic, Non-Stop Party, Burning Cherry, Vanilla Cocktails, Deep Blue, Sign of Luck, Maya Pyramid, Legend of Unicorn, Luxor Valley, Coffee Time, etc. I can’t call which one is my favourite because all of them were same to me. Yes, there is a difference and all of them are unique on their own but looking at the game play, there mere is. If you have played any other slot game, then this can’t bring a change to your routine. Just looking at the specs, we can say that the developer has chosen quantity over quality. So, be ready there’s a lot to check out.

The graphics are very good and one can tell that efforts have been put here. There are lots of items including hot babes but I won’t say that anything is new to the eyes. It would have been better if the developer had taken a character theme and designed different cartoons or something like that so that the users might have been interested to take part in. but still, the overall feel of the game is very beautiful and I must say that all the screen space has been utilized in a very unique and elegant way.

The app is available for free in the App Store. I won’t say it to be a “out of the box” show, but it still boasts some nice features and amazing display of graphical images that you will be happy to be a part of it.

Cons: nothing new; quantity over quality.