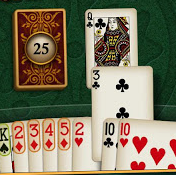 Aces Gin Rummy is an application for Android, developed by Concrete Software Inc., who has already released several types of classic card games. Aces Gin Rummy is their latest app in the form of a card game and is available in the Google Playstore. It has all the features of layoffs and bonuses that are to be expected in a Gin Rummygame with a solid game play offered. The styling is Victorian era and the game has several quirky characters that make it a unique game play. The game is quite different from their other titles, such as Aces Spades and Aces Hearts. It is very creative, especially with respect to the characters.

Though the game is a traditional card game, there is sophistication to it with the use of Victorian styling, the hardwood and brass look. The presentation is flawless and the game play is a classic one. It is a great addition to those interested in serious card games. It is a great addition to the Aces Hearts and the Aces Spades games from the same developer. The best part is that it is possible to win against the computer in this game. The level of play can be changed as well as the character picture. The graphics are excellent as well.

The only bad part is that it can keep you up really late into the night playing, if you consider that a fault.

Aces Gin Rummy is an awesome card game from Concrete Software Inc. that makes all other card games appearing to be just like deadwood. It is a fun and portable way to enjoy playing gin with a realistic play action for cards, great sound effects and very good prompts along with good score keeping.