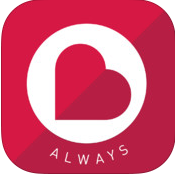 Happiness, in itself, is a very abstractly defined term. While everyone has a different opinion of what happiness really is, we’re all in search for it ultimately. Defining its essence and developing it enough to create an app of it seems almost impossible. Nonetheless, Ana Isabel Chimeno has done exactly this in the iOS app Always BHappy. A few things are sure to put a smile on everyone’s face.

The iOS app is aimed at increasing the happiness levels of its users on the whole. The app does so by giving them a set of ‘happy tasks’ each day. These happiness challenges are provided on a daily basis and serve as a reason to spread the smile and laugh. They help you look at the brighter side of life where the grass is greener and the skies bluer. These are simple tasks varying from laughing in public to practicing smiling in front of a mirror to waving at passers-by to making a child smile. It does not take much effort to accomplish either of them. All they ask for is a positive approach to life.

A number of happiness proposals are provided by the app. Users are given a choice between them as well. No compulsion or pressure has been imposed in any form. The main incentive is to build up your score and gain access to higher level proposal packs. Each of the proposals has been thus created that it will increase your happiness levels by a certain amount.

When initially downloaded, each user is awarded 30 free proposals. They are allowed to access one proposal per day for 30 days. If you manage to score enough, you can move into higher level packs. If you would like so, you can purchase a pack of 30 proposals in the in-app purchases as well. Some extra happiness would do no harm after all. Once you begin executing the proposals, it will seem like a feel-good drug in a way.

If you have ideas of your own to make someone happy, you can send in your own proposals too. You can personalize challenges and send them to family and friends. You can share your personal progress with followers on social media like Twitter and Facebook too.

The design and layout of the app is fairly simple with minimal graphics. It is a mediocre layout that serves the purpose needed. Navigation is not particularly top notch but scores fairly well. It takes a tad bit of getting used to in the beginning but becomes easy to use henceforth. The fonts used make things easy to read. The background is bright and uses peppy colours, giving the app a soothing look. This contributes to the overall effect it has on your happiness and mood.

However, the English translation of some of the challenges turned out grammatically incorrect, which provided a source for disappointment. The translation was good enough for users to follow and complete the challenges though. The app has been kept lightweight to avoid slowing down your device.

Good: Concept of creating happiness through an app