Amazing Beat: Pulsating with the Beats 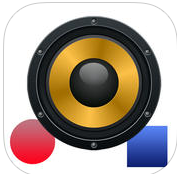 If you enjoy music and like challenging games, then here’s a combination of the two for you. ‘Easy to play but hard to win’ is what the iOS app Amazing Beat is here to show you. Developed by HadiPintarto, it is a gaming app based on music. You simply have to move with the music and react to its pulses quickly. As easy as it might sound, the app is hard to master, owing to the speed factor.

The simplicity of the gameplay makes the game more challenging than others in its niche. All you have to do is to tap on the correct side of the screen to match icons that are falling towards the bottom of your screen from the top. The twist in the tail is that you get only one chance at it. A single wrong move can ruin the entire game for you. The app eliminates all complications of lives and bonuses, keeping the game as simple as can be.

To introduce the music element, users are allowed to choose between five music tracks. As the music plays, different shapes, either red circles or blue squares are launched from the top of your device’s screen. Each beat brings a new shape with it. Once the shape appears, it keeps moving at the same rate as the music, allowing for the next one to move in. each time you hear a beat or see a shape, you merely have to tap on the correct side of the screen. The left side is for blue squares and the right is for red circles. If you delay a single tap, the shape will hit the bottom of your screen, ending your game immediately.

The competition element is brought in through high scores. No sooner than your game gets over, you will see a score. If it happens to be a high score, you can share it on social networks including Twitter and Facebook. The game is supported by ads, which can be a bit irritating at times.

The graphics of the game are extremely basic and yet elegant. There are mainly two screens. The first screen allows you to choose one of 5 music tracks- “Sonic Blaster”, “Spread the Wings”, “Prelude Theme”, “Rave Beat” and “Collision Course”. Each of these tracks has a different pace, hence requiring different skill levels. Once you select the track, you are taken to the game screen, which is equally simple.

Although the game is simple, it does test your reflexes well. The fats pace of the music can be hard to cope up with at times, making it very challenging. While it is easy to get used to the controls, getting used to the beats and their varying speeds need some practice, skill and a sharp mind. The game does not provide a tutorial about what is to be done as such, making space for experimentation and exploration. It is meant for those who like to learn through experience.

All you need to succeed in this game is a sharp mind and persistence. It is compatible with all iOS devices having iOS 4.3 or later.

Bad: Ads can be irritating sometimes