Aquator : Shoot out the Monsters 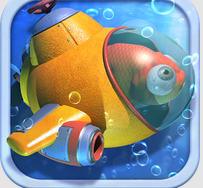 Aquator is a 2D shooting game making use of an accelerometer, which is the primary controller. The theme comprises of the sea being in danger due to the presence of aquatic monsters. These monsters want to kidnap the baby fish and teach them disgusting practices, such as picking their noses as well as eating with dirty fins. They player’s task is to save these baby fishes and kill the monsters, by playing the role of a good Aquator and complete the mission.

The game is simple and it is fun to play it. For those who have always dreamt of being a savior, the Aquator can more than fulfill their wishes. Swimming with the fish becomes real fun as you protect them from evil and save the underwater world.

The Nuke button has to be spent careful, as it takes a long time to reload after you have used it once. Mastering the game is also a little difficult.

The Aquator from Vacata AG is an app that is based on an emergency in the sea kingdom. The player has to protect the baby fishes or offspring. The Aquator is dispatched by the fish community in order to fight the aggressors. The Aquator is equipped with the latest scientifically developed combat bathyscaph and the submarine ship is set with the most powerful cannon for doing this. It is an Android app that can be downloaded from Google Play in the Arcade & Action Category.