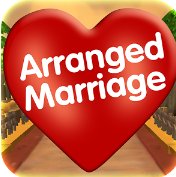 If you’re an Indian or if you have the slightest of clue about the Indian society, then you must be well familiar what’s the interpretation of marriage is here, right! Here, a concept of arranged marriage is widely accepted under which it’s not the boy or the girl who decides whom he/she’s going to marry. But they are the parents of both who’ll meet each other and fix the marriage. Though the practice is fainting out slowly with time and westernization of the society, it is still very popular in many parts of the country. So if you have a girlfriend that your parents don’t agree for and you’re one of the about-to-be victims and you’re against the ritual, let’s join hands with Junglee and run for your love!

Before you pack your stuff and are ready to leave your home in the midnight, first step back and take out your Smartphone. Then download this app called “Arranged Marriage?” that has been developed by Junglee Games. The app is compatible with all the Android devices running Android 2.3 or any later version of the OS.

Arranged Marriage is a game where you will be running endlessly for your love and freedom. The game starts with you and your lover starting off from your home and then it’s you alone in the long run with your lover right behind you. On your way, there are numerous obstacles like auto rickshaws, pillars, grazing cows, etc just like the streets of India are used to. But one of your biggest obstacles will be dowry. You have to avoid all of them and keep running as long as your stamina doesn’t die out! So in a way, this app teaches young children about the ill-practising of dowry system in a fun and interactive way that would stay longer in their mind than what they read in textbooks.

Though we have seen many endless running games in the past, it’s the typical Indian styling with a young bride and groom in their wedding dresses running from their respective marriages that makes this game a must play. It has got the flavour that can click with many hearts in the big country. Moreover, the gameplay offers many power ups such as a horse (epic!) to ride on quickly or there are other power ups that’ll get you double points for your coins collected. So there’s a lot of content to keep your hunger satisfied for long. The longer you manage to run, the higher will you rank in the leaderboard. It gives a competitive edge to an otherwise solo race.

So overall, I think this is an app you must check out this season. It’ll make you smile, laugh or even cry (if you’re already married). The app is available for free in the Play Store. So what are you waiting for?