Beat the Time to Win the Game with Qdict 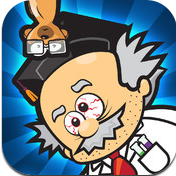 Genre : Games
Platform : iPad | iPhone
Developer : Qdict BV
Rating : 4.5
Positives : The graphics of the app is kept quite simple that does not interrupt in showing the word properly, on the screen.
Negatives : The game has not received any complain so far. The bugs in the earlier version have been fixed.

How good you are in typing? Have you ever tried games that challenge your typing skill? If you think you are the best or can be counted in the better typing experts in the world, then here is Qdict for you. Qdict Lite, presented by Qdict VB is a game of typing challenge and it is quite different from other word games on the block. Here, you don’t require guessing the word or having a great vocabulary to beat your opponent. You just require keeping your fingers ready to type any word that is shown on the screen and that too, really fast.

Qdict puts you into a race against time. Beat the clock while you make the word and remember that your opponent is doing the same. You will have to be really fast in this multiplayer game and put your fingers fast on your iDevice. The multiplayer game is available for free on iTunes and can be played on most of the iDevices. You can participate in more than one game if you want but for that, you will have to sharpen your skills. The game has a single player mode that allows you to practice typing. You can play against your friends or a random opponent selected by the system. Have a check of the features that the game has to offer.

Summary: Qdict is a fun game of words where you will have to type the words as fast as you can to beat your opponent. The multiplayer game provides you opportunity to participate in more than one competition, at a time.

Good: The graphics of the app is kept quite simple that does not interrupt in showing the word properly, on the screen.

Bad: The game has not received any complain so far. The bugs in the earlier version have been fixed.