Bomb Squadz – Why So Serious? 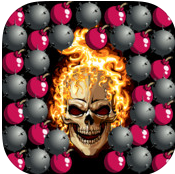 Anything that is dangerous is meant to stay out of reach of children, right? Whether it’s a sharp-edged knife or a scissor or electric wires, young children can’t be allowed to play with them. After all, someone’s life is at stake. But still, if I ask you to let your children to play with bombs, what will be your reaction? I can expect some of you parents threatening me with the same dangerous weapons in their hands, the ones that I discussed above. But some will wait for my next statement to come out and they’re the wise ones. I’m talking about games and when you can allow your child to go on an army mission in games like Call of Duty at such a young age, I’m just asking you to give permission to let them play with bombs. I guarantee they won’t explode, until you make a mistake.

So I guess I have your permissions and let me unveil this new iOS app called Bomb Squadz developed by Ali Arimi. The app is compatible with iPhone, iPod touch and iPad and requires iOS 5.0 or any later version of the OS. This app has also been optimized for iPhone 5.

Let me tell you that there is no mission involved in here. You’re not going on an adventurous trek with your friends with guns in your hands to save your country. But there is a bigger threat to your life as you’re covered on all four sides by bombs. These bombs keep on coming towards you and you have to keep diffusing them or face the verdict of the developer. Now you have fireballs that you can shoot at these bombs and they’ll be diffused. But diffusing one bomb won’t do any good for you. You have to keep diffusing them and therefore you have to keep those fireballs moving. There’s a gear right at the centre that will help you deflect those fireballs in whatever direction you want. Don’t focus on just one direction or don’t blame them when they hit you from your back. A high speed is a must but what’s more important is to keep an eye in all directions. At higher levels, it becomes more difficult because now you’ll have multiple fireballs to juggle.

The graphics of the game are good and in fact, they’re a bit different than the usual. I liked the combination as it sets the stage for the bombs to explode. If you’re exploring a theme, you should colour everything in the same style and that’s what the developer has done and I like that. It feels like a battleground set in the backdrop of blood and anger. The soundtrack of the app elevates the experience to a new level. The Game Center makes sure you don’t lose your high scores.

The app is available for $0.99 in the App Store. Are you ready to take the challenge!