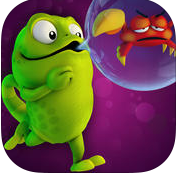 Bubble Jungle Pro, created by Cranky Monkey Studio, is a fun and addictive game which pits the players against an environment that is full of foes, obstacles and tasty treats. The game is designed for both iPad and iPhone and will surely to keep the gamer entertained for hours. The game has genuinely impressive visual features. Its great graphics are as expected as the app covers 1 GB in size.

Bubble Jungle Pro features a single main character known as Chuck the chameleon. Any gamer and Chuck will certainly become best friends as they play through nine different world environments and fifty-eight levels. Each level is extensive and long which makes the game interesting. However, there are arrow signs which are helpful in guiding the gamer through each level so as to help in arriving at the end goal.

The auto-save feature ensures that the player does not lose their progress if they have to stop playing in the middle of a level.

Another great thing about Bubble Jungle Pro is its simple controls. One simply taps and drags their thumb on the screen’s left side so as to move Chuck the Chameleon around the map. On the right side of the screen there are 2 buttons; one is for shooting bubbles and the other for jumping.

It is interesting how one is able to use bubbles in destroying boxes for goodies and also to subdue enemies. Moreover the number of bubbles is limited and therefore one should conserve them and this makes the game interesting.

The pro version of the Bubble Jungle Pro allows an individual to customize Chuck the Chameleon with accessories and also play online with up to 3 other people.

It is absolutely worth mentioning that the free version of Bubble Jungle Pro has a free version. However, the free version has rather a few limitations and is certainly not as good as the pro version that lacks any major drawbacks.

The game has a very reasonable and affordable price tag of $0.99 in the app store considering the great and plenty content that it offers. Bubble Jungle Pro is actually currently 50 per cent off for the limited time, but still the app is worth it even at its full price.

The game has great features with simple controls that are perfectly enough for the gameplay. There are no penalties for trying to pop a bubble that has already been popped so it would not really matter much if one just keeps stabbing at the screen wildly. This makes the game entirely interesting and enjoyable. The game might not be the most intellectual or dynamic app, but it is unquestionably one that can get an individual caught up with easily due to its addictive nature. The game is kid-friendly as well. It is important to remember to have the headphones at hand in case anyone is going to allow the children play with Bubble Jungle Pro in the car. The game is indeed worth a try for any mobile gamer and none should hesitate getting it from iTunes.