Carrom Stars: The Most Addictive Game of Carrom 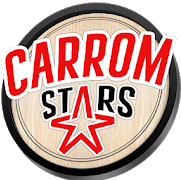 Carrom is an easy-to-play classic board game for all ages. How would you like it if this simple game is brought to your mobile with accurate physics and great gaming controls? If you are a lover of casual board games, then you will love Carrom Stars. It is a multiplayer game that guarantees unlimited fun.

About the Carrom Stars App

Placed in the sports category in the Play Store, it is a Carrom app that follows the normal rules of the game. The app allows you to play the game with players online from across the world and lets you choose from three game rooms. The app is suitable for all those above three years of age and can be downloaded for free.

How does the app work?

You can sign up using your Facebook account or mobile number to use the app. In case you don’t want to do that, you can choose to play as a guest. You get 10,000 free chips as soon as you sign up. You are always paired with players whose skill level matches yours. Once you select one of the three game rooms (each with a different entry fee and prize amount) the game starts.

Your objective is to put all your pucks (black or white) in the pockets before your opponent can. You must also pocket the Queen (red piece) to win. The Queen should be followed by another puck immediately to be covered. If it is not covered, it is placed back in the middle. Pocketing the striker is a foul and you have to put back one of your pocketed pucks as a penalty for that.

The design and interface of Carrom Stars is very simple and user-friendly, which makes the game more addictive. The app has two game controllers, and you can use your finger to aim the striker and to use the striker to trace the trajectory and shoot. You can turn the sound and vibration on/off. The app has a Practice mode, which allows you to practice the game alone offline. This is more useful to newbies as they can sharpen their skills playing in this mode. Carrom Stars also gives you free chips for referring your friends.

I wish the app had a Leaderboard and a few more levels, which I think Junglee Games developers will incorporate soon.

With Carrom Stars, you can experience real Carrom gaming like never before. It is the most immersive game and you always want to play more!