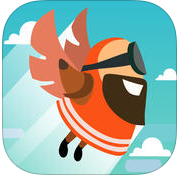 I’m talking about the latest iOS app called Come Fly that has been developed by Ureation. The app is compatible with iPhone, iPod touch and iPad and requires iOS 6.0 or any later version of the OS.

Come Fly is a very easy to play tap game. You have to tap on the screen and make the character fly high in the sky. As he flies, there are many goodies and power ups that you have to collect. But at the same time, the heart beat of your character keeps coming down alarmingly and if you don’t do anything about it, you’ll soon die out. These power ups keep his heart pumping and you have to maintain a constant supply of them. But apart from these intakes, there are some flying objects and creatures that you have to avoid. If you touch anyone of them, your game will be over instantly.

You can tap on either side of the screen and the character will fly in the same direction. So you have to guide your cute character with precision to take maximum power ups and avoid all enemies as far as possible. The higher you go, the higher you score. The game keeps on getting more and more challenging as you touch new levels. The gameplay is quite fast with many different elements and if you like challenges, you’re definitely going to love this one.

As far as the graphics of the game are concerned, then they are just amazing. There are bright colors, flawless animations and so many cute characters that you can’t have enough of them. There’s Butterfly, Alladin, Kite Lady and many more that you can choose from and each such cute character has its own backdrop and soundtrack. It’s like you’re on a tour and every guide has its own world to show you. So just hold its hand and get ready for some serious action.

So does Come Fly meet our criterion? It’s a definite yes for me. The game is full of adventure, beautiful graphics and challenging gameplay and once you’re in, you’re sure to have a good time.

The app is available for free in the App Store and there are no ads. What more can you ask for!