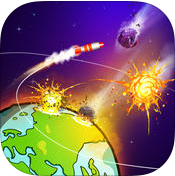 Comet Clash is a awesome game with great graphics. If you have played Angry birds and if you liked it, then you’ll love the Comet Clash.

You should have strategic thinking and you must be master of timing. It’s important to have skills in this game because it isn’t as easy as it seems. You must be focused. To tell the truth, I don’t have experience on that kind of gaming category. I play games only on laptop. I like to talk with my friends by skype and playing games with them. You can learn many things from gaming. The Comet Clash was the first game that I loved in that kind of gaming category. I learned many thing from it. I was playing it at my school trips. Sometimes my friend stole me my iphone when I was going in W.C and they was playing too. I didn’t have problem but I talk with them to stop stealing my iphone to play the Comet Clash.

After two month this game have been famous. All students was talking about it. It has been popular game. This game have big advantage because It’s absolutely free and this is the fact that many downloads had been become. Developer who create this application was clever because he didn’t charge it and also he created a great graphic strategic game with big results.

I think the story are so great. The action are the best in this game. But the problem is that the game is for little guys like 10-12 year’s old. Of course bigger people can play it but they play it only to pass the time. They can’t take the game serious. Alright I have been seen people up to 15 year’s old who they was playing this game and they was taking it so serious. At first I couldn’t believe it, but I think that there are people who can take serious a simple game like Comet Clash. I had a classmate who was 17 year’s old and he always talk about the Comet Clash and I was getting tired my ears to listen him. One day I told him about this and I think he start to understand. You must be careful with games because maybe you have problems in the future. You must be take relax all kind of games.

I like this game because it’s too difficult to have mentally problems. It’s a simple game on android and you can pass the time with it. I would suggest to download this game, it’s perfect. You can play it anywhere. I angry birds are more popular game than Comet Clash but I think Comet Clash will have better future because I think is a new game and many people have been downloaded so, in the future it will be better than angry birds.

The Comet Clash have the same graphic like angry birds. Also they are in the same kind of category gaming. I think they will have full competition. Today, angry birds are downloaded by many people. Also the Comet Clash. At the moment we cannot compare the two games but in a short time will be able to compare.