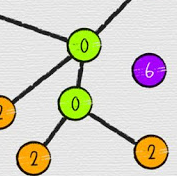 Puzzle games are considered to be the king of all games, and the come first in the preference list when you start searching a game for your smart phone. These games have the seer power to keep people engaged for hours, and till you can reach your goal, you will not be able to sit still. Such is the magic of puzzle games, and if the developers of the game are smart enough, then it would never disappoint anyone. With android taking charge of the gaming market, new games with added features are out in the market every day. However, a puzzle game like ConnectiXX from Matthias Lange will keep you involved, and you will surely enjoy every bit of it.

Matthias Lange has introduced a game that looks easy, and if you can join lines by dragging it from one point to another, you can play it. However, it is not that simple, and the difficulty increases with each level. The game comes with 200 levels, and each level has a new logic involved. You will see some points on the screen and each point would bear a number. The number indicates the number of lines that needs to be drawn using the point. If the number is 2, then there must be two lines touching the point. The count for each point will gradually decrease with each line you draw touching the point. Every line should connect two points, but none of the line should cut each other. You have to get zero for each point to win the level.

Summary: ConnectiXX is an exciting puzzle game with high speed operation and numerous levels that are not offered by many such games. The clear interface and easy to understand operation is a significant advantage. The game can be played by kids as well as adults though kids would find it a bit difficult.

Good: The game interface is a uncomplicated one with no complex button. The game takes less space on your android device and thus does not take much time to get loaded. The game is currently offered free of cost.

Bad: Though the game is excellent as a whole, the background could have been much appealing.