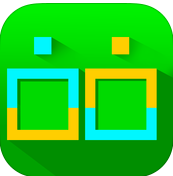 Nowadays, the size of games is increasing exponentially but the gaming quotient is decreasing at the same rate. After you download a heavy adventurous game, it is hardly worth the time you waited for it. Most of the times, they’re copies of one another with a few minor changes here and there. The hero instead of carrying an AK-47 is carrying an AK-56 and we call it the “next-generation” game. But they are the simplest of games that actually stay with you, poke your curiosity and actually test your brain. That’s because they’ve been designed with the sheer motive to perplex your sharp mind instead of wasting the efforts solely on designing the attire of the protagonist. I’m happy that finally one such game has made it to the App Store and we’re going to discuss it next.

I’m talking about the latest iOS app called Cube Collider that has been developed by Max Goldberg. The app is compatible with iPhone, iPod touch and iPad and requires iOS 6.1 or any later version of the OS.

Cube Collider, as I’ve already told you, is a very simple but challenging puzzle. Here you have two boxes – half painted blue and half painted yellow. As you enter the game, you’d see two cubes of same or different colors falling down from the top of the screen. You have to match the color on the cube with the color on the upper side of the boxes lying at the bottom of the screen. To rotate the boxes, simply tap them. The rules are quite simple to understand and but very difficult to follow. Let me tell you why!

Actually most of the times, your fingers would be confused as to tap which of the boxes. Sometimes it’s the first box you have to rotate and keep the second one intact or vice-versa. Then there are other situations as well when you have to tap both of them or none of them. The situation gets too messy when the cubes start falling quickly. So as you proceed further in the game, soon you’d be struggling in the race against time and a time would come when you’d finally submit to the challenge.

But practice makes man perfect! This game is a living example of the adage. The more you play it, the better you get and soon you’d be putting a respectable score on the board. This hard work of yours doesn’t go waste as you can share it with your friends. Also, don’t forget to invite your friends for a one-on-one challenge.

The graphics of the game are simple, soothing and apt for the situation. The developers haven’t attempted too much and neither was there any need for that. It’s pure fun!

Cube Collider is available for free in the App store. So what are you waiting for?