Cyborg chicks Vs Space Sandwiches – Girls Love Food, Do they? 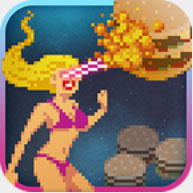 There was a time when we used to play video games where characters were made of dots much like you see digits on a calculator. There was a space jet with missiles and we had to destroy the enemies that came across or escape them going from left to right or vice versa. Though this concept is still followed but there have been lots of changes, graphics are lot better and one cannot tell if it’s the same until and unless you have played both of them. Now, games are as realistic as the reality itself and that’s the beauty of the game. But regardless of this fact, there are many developers that are trying new things because “New is Old” now and you got to take out something new out of the box to attract the users.  We have such a work today here for review. Let’s check it out!

I am talking about an Android app called Cyborg Chicks Vs Space Sandwiches that has been developed by Monkey Horde. The app is available for both Android as well as iTunes. The app is compatible with iPhone, iPod touch and iPad and requires iOS 6.0 or any later version of the OS. The app is optimized for iPhone 5.

The story behind this app is well crafted that there were some beautiful girls living happily when they were attacked by sandwiches . But now they want their place back and that has led to a long lasting journey you’d be a part of. If you’ve watched its intro video, by now you’d know that the graphics are somewhat distorted and you might have checked if your display is working properly or not. But it’s a technology called Pixel Art and most old console video games were based on this. It’s not used nowadays but there are still some enthusiasts that like it and I guess our developer is one of them.

The gameplay of the app is much interesting  where you had to move the player left or right and save him/her from the coming obstacles. Here, you have to shoot the coming sandwiches and take the cash while avoiding any contact with them. There are many power ups going through such as protection mask, ultra speed heels, etc. You can also buy these power ups from the shop in exchange of the money you earn. But if you can’t make it, you still have the option to gain some bucks and dolls via in-app purchases.

There are 25 different characters available for the leading lady. You can unlock all of them and looking at the overall set up, it’s a game for girls. Had it not been restricted to adults, young girls would have liked it a lot, of course teen boys can enjoy the bikini shows.

By the way, the app is available for free. So don’t forget to check it out in the App Store now!

Fabulous videos of this Game for you: