Empire: Four Kingdoms – Time to meet your Allies and Enemies 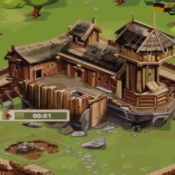 When you get a chance to travel to the ancient age of empires, kingdoms, wars, missions, etc., will you miss that chance? Definitely I won’t miss it. The thinks we hear in history can be brought back to life only in the form of games. One such game is Empire: Four Kingdoms. These games of type historic genre are very popular only in PC or in any gaming consoles, but Good Game has smashed that thought with this game. These type of games are very interesting and realistic only when you compete with the real-time users around the globe. This game is designed in a way to roam around the globe easily and form a kingdom of your own choice. You are given a complete freedom to roam around the entire game map and grow your empire the right way.

Most strategic games around the market are boring single player game where you will have a defined target to compete with the programmed opponent but this game is very realistic. All your opponents are some other player from some corner of the world. Choose your allies wisely and form a team. The main motto of this game is survive as a team and fight as a team. With the allies you get option to exchange the resources whenever needed and even you could provide army support to your allies whenever they are in trouble. Once you form an ally you get an option to chat with them. you can enable or disable this chat option but this chat option helps you to frame a strategy as team and attack your enemies. Isn’t it real fun to interact directly with real users of various locations around the globe?

This game is absolutely free to download and play in your iPhone/Android devices. Especially for apple iDevices it requires a minimum of iOS5. It supports all iPhone versions starting from iPhone 4. It works great with most of the iPad and iPod touch devices too. This game is well optimized for iPhone 5. like any other game this game also offers few in-app purchases in the form of gold coins/ rubies. You could buy them make the game more entertaining because they are the integral part of this game. But you could get these resources for free if you play this game strategically by attacking suitable enemies and loot the resources from them. With small tasks assigned for you to complete and grow up the level in the game. The more stronger you create your castle the more deadly you will be for your opponents. Plan your defense mechanism strategically before you make a move to attack which will always keep you entertained. Generate more coins by collecting taxes from your civilians and utilize them wisely to develop your army.

Pros: Graphics and quality of the game even in low speed connection. It works in a client server mechanism like if you initiate your fight you could come out of the game and the game will continue in the game server without any issues. It doesn’t consume much of battery life of your devices even if you play the whole day.

Cons: Time consuming as each task needs more time to complete. Can’t interrupt an army which is already on it’s way to attack and deviate to attack some other castle. If you wish to make another attack with the same army then you need to wait until your army reaches back to main castle.