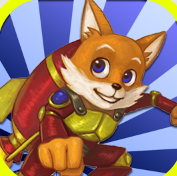 Games full of pace are always liked by players and they are quite easy to understand, too. There are several endless running games that are full of pace, but their control and actions seems to be similar. This time you have a game in the play store that has something different to offer in terms of action and the way you play it. Fox Tales: Rocket Run is a completely different game and you are going to enjoy the thrill and pace of the game for sure. In the game, your only control would be your finger and you can control the movement of the fox by either using or not using it.

Fox Tales: Rocket Run, presented by Won-O-Soft is a new game which tells the tale of a fox, Kizu, which got fixed with a rocket in the back. Now it has to travel and reach as much distance as possible. There would be dangers and death traps in the way. At the same time, there will be coins to collect and power ups to get which will give it more power so that it can travel more distance. The game is simple and the control is simpler. When you press your finger on the screen the fox will move up and when you release the finger it would fall towards the ground. Adjust accordingly and travel as much as possible.

Summary:Fox Tales: Rocket Run is a action game that tells the story of Kizu the Fox and how it travels with a rocket through a path filled with difficulties.

Good:One touch game play is the best attraction of the app.

Bad:The app has received the highest rating and nothing bad is reported.