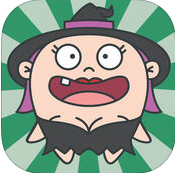 If you are interested in playing games that can be engaging, challenging, thoughtful and gives you some intelligence also, then you have landed on the right place. It is said that Adventure games have been the most story-rich games for over 20 years. There are so many adventure games on the iTunes Store that it can be hard to find a place to start. Every game has different goals and rules to play. Flying Witch Mania is one of the best adventure and challenging game play, which is ruling the world especially kids. If you want to fly as a witch and do some magics and want to escape from this unreal world, then you should try Flying Witch Mania- an impossible spooky flappy game play.

Flying Witch Mania is an awesome gameplay and ultimate one touch arcade game introduced in the market. Wherever you decide to play and whatever you decide to do, the adventure is in your hands. You have to act like a witch and help her to fly through the flames to collect bones. You can jump through the flames to constantly move the witch forward.

Flying Witch Mania is a unique and addictive gameplay that you can play with one hand. It has been offered by Raul Cruz. This app requires iOS 10.0 or any later version of the Operating System and it’s compatible with iPhone, iPad and iPod touch.

There are so many levels to play in this game. Once you complete a level you can unlock new characters which will help to boost your performance. There are 8 awesome characters to play, which you can choose from. The characters will behave differently depending on the timing of your taps. So, try to put on an act without any difficulties and stylish moves to collect a large number of bones quickly and easily.

While collecting bones, there will be many obstacles that will hinder your path, but you have to protect yourself from them and fly as far as you can. There are unique gadgets and equipments that will help you to jump to the next level. You can compete against your friends and challenge them and other people from all over the world. You have to climb on the top of the Leaderboard and beat against the highest score. It’s a challenge now! Collect as many bones as you can!

The app has super cute graphics and awesome effects. The background sound is just like a sound of a real witch world. There are many missions to complete in this simple one touch gameplay. Flying Witch Mania is easy to use and meant for fun only.

It is available for free in the App Store. Download it today and challenge your friends and family. A new adventure awaits for you!