Galaxy Control: 3D strategy : Entertains you For Sure ! 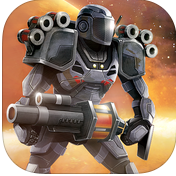 Galaxy Control: 3D strategy is a tower defense game by FX Games Media. As its name probably suggests, the graphics of this iOS game are somewhat 3D and gamers have to complete one mission after another, defeating a wide range of different units. A total of 25 achievements can also be achieved in this game.

Galaxy Control: 3D strategy places gamers as a citizen on one of the Human colonies where they have to fight back Space Pirates to eliminate the threat they pose. Whether you prefer playing your games on a console, mobile phone or PC, if you own an Apple device like an iPad, iPhone or iPod touch, you will really enjoy playing this game. Above all, you can download this game for free.

Once you have downloaded the game, you will then have to view an interactive tutorial in order to learn how to get started.

The tutorial will explain everything that you will need to keep in mind in order to progress, such as using factories to produces soldiers, etc.

The tutorial is relatively precise and short, but you will end up getting a perfect glance at the 3D graphics even before you have begun playing. Once the tutorial comes to an end, your base will become visible and can proceed to making your next move.

Your base is also technically the main menu for the entire game, since you can view all of your stats, settings, your goals and you can also begin new missions from there too. Reminds is a particular feature of Galaxy Control: 3D strategy that you will probably like, since specifics buildings, etc. will speed up whenever you use them. However, you will have to spread the word about the game in order to earn Redmins.

The more time you spend building your base and completing missions the more impressive it will look as the game progresses. At the same, the missions will also continue to get bigger and more challenging as you keep on progressing through the game.

Once you get started playing Galaxy Control: 3D strategy, you will discover that this game is not so different from other similar titles you may have played on your iOS device. However, this is not necessarily a bad thing because it will help you with getting familiar with the game. Moreover, the game has plenty of pros. It is an action-packed game that you can get through quickly without it getting stuffy. The details of the 3D graphics are sure to impress you and the animations give this game a unique feel and look. You will also remain busy playing this game for a long time, considering that choose from different units and gather a myriad of minerals in order to build an effective army.

If you are a fan of strategy games, then you will definitely love Galaxy Control: 3D strategy, and even if you have never played such titles before, you can still try it for free. While the superb 3D graphics are sure to draw you into trying this game, you will continue playing because of the enjoyable gameplay experience.