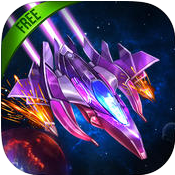 The game Galaxy Fighters, available for IOS is an entertaining game that is available to play completely free. It is a classic style rocket-ship shooter game where you play as a rocket in space and have to shoot down enemy ships. The graphics are well done and the accompanying music is catchy and suits the game well.

Upon first opening the app and pressing play, It was not immediately clear what I should do. There were two red buttons on the lower right hand side that I started pressing to discover one made my ship go up and the other shot bullets. I was trying to move forwards towards the enemy ships, as that is what it seemed like I should do but was only able to move side to side. After starting to get the hang of moving side to side, and shooting the ships I began to have a little more fun and became less frustrated. The help screen is lengthy and It could have been condensed to make it easier for the player to learn the techniques to playing.

It is addicting once you start to get the hang of it. The graphics are compelling and the constant movement keeps the game interesting. Despite being more comfortable with moving around however, I was repeatedly getting shot by the alien ships and dying as a result. This grew rather frustrating. The alien ships lunge at you from seemingly out of nowhere and it is hard to avoid them. I did not last very long playing the game because I kept dying and it grew repetitive. I would recommend if its possible to make the space ship be moving forwards in space or at least make the background move down to make the viewer perceive like they are moving because the static background gets a little boring. The music goes really well with the game and is a great addition to the atmosphere of the game. It is an entertaining game to pass time with but it is not one that I would play regularly.

It is somewhat difficult to maneuver the ship left and right, and the alien ships seem to be able to move more quickly. I would really like to see forward and backward mobility with the ship in this game as I feel that the extra movement will enable the player to attack the enemy ships from a better vantage point and will keep them more entertained as there is more for them to do. In total, I think it is a fun game that has good graphics and catchy game music. It is a classic throwback to original arcade style games which there is definitely a market for. I would recommend it to someone who is a fan of arcade style games and is looking for a free app to pass the time with.