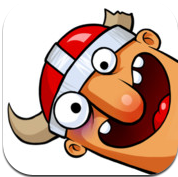 Goal Defense is the newest member in the tower games genre of games. Goal Defense is a classic tower defense game in which the players have to defend the Golden Bowl Trophy from different types of athletes (enemies or challengers) who originate from different points in a never ending fashion. This game has been developed and launched by the Dynamic Pixels Company for iPhone and iPad users. Dynamic Pixels Company has previously introduced a number of interesting games in different genres. In Goal Defense, the players are entrusted with the responsibility of training a group of underdog heroes and turn them into an action packed and well-trained defense team. In this game you have to use your brains and create new strategies to defend your cup and at the same time have loads of funs with the hilarious animated characters.

Goal Defense is similar in its structure to the many tower games that are available, but it has a lot of differences which makes you feel refreshed and at the same time have more fun when compared to the others. Enemies will be originating from specific points and the path which these enemies (in this case it is the athletes) travel will depend upon how you position your players. There is also an option available for the players where they can strengthen their defense from the money which they gather by attacking their enemies. In Goal Defense game, players from all sports are represented, which includes boxing, baseball and many others. The players in this game are depicted according to the famous National Lampoon or the Mad Magazine style. Each of these players will have a unique ability and they portray a unique style of personality.

At the start of the game, you have to position your baseball players in different positions in the field. The game starts now. You have to protect the Golden Bowl Trophy from the enemies who will originate at different points. The baseball players can attack the enemies. For each that you attack, you will gain points in the form of currency. The path that your enemies travel in, will be indicated by the arrow marks which will appear on your screen, but when you place your players in the grid area then they will change their course of travel. In this case you may find it challenging to defend your territory. Players can also do a lot of upgrades to their game by purchasing weapons and players from the store by using the currency they have earned by attacking their enemies. Players also have the option of upgrading the speed.

Goal defense is an interesting arcade game play for kids of all ages. The app is available for download from the App Store for just $ 0.99.