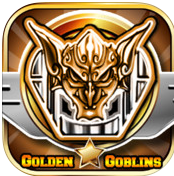 Golden Goblin Pro is an adventurous game where you have various hero characters like Boblin, Chopter, Glifly, Flapter and Gobird. Boblin is a free character available when you purchase this game from iTunes app store for $0.99. All other characters can be unlocked using the gold coins which we collect while playing this game. The theme of this game is very simple, just survive while traveling in the golden goblin cave in search of gold coins. We have to collect as much as gold coins and stay alive by killing some of the vicious characters which will try to attack with in this cave.

This game is designed for both iPhone, iPod and iPad. This game requires atleast iOS 5 or later. This game is designed and optimized well to work for the screen size of iPhone 5 or later. It requires a minimum of around 12MB space to install this game.  The game controls are very simple, all we have to do is just tap on the left side of the display screen to move the hero character. Just tap the left side and drag the hero character wherever you want. We have an option to fire against vicious characters, which can be done by just tapping on the right hand side of the display screen. We have to be well trained to balance between the move and fire controls otherwise we will be easily attacked by the vicious characters in the Golden Gobin cave.

While playing the game we will be able to collect not only gold coins but some silver coins as well. We have few boosting features as well, when we collect a magnet it will automatically allow us to collect all the coins at time. When we collect a bomb it will kill all the vicious characters that we encounter at that time.  The difficulty of game is determined based on how long you are surviving. Based on the length of your survival the speed of vicious creatures will increase. The rodent creatures that lurk with in the cave are of various shape and size and they travel to attack at a different speed. So we have to be very cautious enough to survive from their attack.

The game Golden Goblin Pro is well integrated with Game Center where we can keep track of the scores and challenge our friends easily. This game offers various in app purchase feature to purchase the gold coins by spending few dollars. The game has a unique graphics of the goblin cave and the background music is very unique. Even the game control sounds will keep you alive and active in the game. This game is perfectly designed for kids but it’s not limited only to kids. The game is very adventurous and more of a fantasy theme which will even get the adults addicted to it. If you are strong enough to challenge and survive against these rodent creatures then you will enjoy this game to the most.