Great Gaming Apps That Will Work Both on iOS and Android 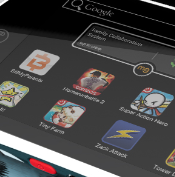 As we work our way through the ever growing labyrinth of game apps one frustration we often get is that some games are meant to work on only one device.

You can run some Android games on an iOS device, and vice versa, but it really isn’t common enough.

The difference between iOS and Android

Android refers to a google device.  iOS is owned by Apple.  Androids are super customizable; iOS has a reputation for being clean, secure and hard working.

Best of both worlds

What you’re looking for is a game that has an Android version and an iOS version. The publisher might have a single sales page with click-through buttons that lead to one version or another.  Or you might see a tab at the top of the description page.

There are many different kinds of apps that people like to play: here are just a few for you to look over – and they’ll work whether you have iOS or android.

Defining tradition can take a lot of work and will always be debated.  Here are three great games as examples.

These games are all more than a hundred years old. They require skill and intelligence. They require concentration and focus. Players can improve their game with practice and are easily ranked by their acquired skills.

If you want to play Multiplayer Chess, you could try Chess Time. It is the easiest and best way to play standard chess long-distance.

The game itself needs little introduction. Of all our traditional games it requires the most patience. It involves intricate planning skills and long term vision. Most of all it has the need for a competitive personality combined with a cool head under fire.

With Haptic Apps Chess Time, you can play with friends anywhere in the world. New features include the ability to log back in to a saved game.  You can also enjoy leaderboards, skill ratings, chat rooms, and asynchronous matchups for instant play.

This one is a bit of a cheat. Jawfish Words is a variant on Scrabble, and the classic game of Scrabble has only been around for 79 years. But Scrabble is an intensely popular game that requires skill. It also requires memory, math skills, and visualization. It is a highly competitive game that can be enjoyed by more than just two people.

Jawfish Games has published Jawfish Words, a more visibility-oriented variation of Scrabble. Instead of laying out your own words on a grid, you are finding words by connecting lines between letters. Challenge your memory, your intellect, and your vocabulary store.

You can also challenge other players in tournaments.

There are always games that will get you a little more excited, of course. If you are into e-gaming, then you may be ready to play for stakes. Google sells many free card-game apps that will work on both iOS and Android.  Some online platforms, like PokerStars, publish trusted gaming apps. Their Mobile Poker app makes it really easy to practice the difficult and famous game of poker.

Poker requires math, high levels of skill, and concentration. It also requires a kind of art-form in the ability to read your opponent. Observation and an ever-growing knowledge of great plays is needed if you want to make it in a game of stakes.

Mobile Poker also allows you to watch Poker TV live on your phone, so you can see how the big pros do it. And you can become involved in watching the famous and exciting European Poker tour as well.

Up your pulse and your reflexes, as well as your sense of strategy.

This is the latest from EA Swiss Sarl/Firemonkeys.  At over 200 million downloads this game from one is super popular and doesn’t need much of an introduction. Once again challenge your friends to see how fast and dangerous you can drive…without a risk to your insurance.

What would video games anywhere be without the brave marines making the next stride into space? Fight for mankind’s survival by shooting a lot of aliens in the face! Any fans of the Xbox game Halo should find a very happy home with Gameloft’s space fighters.

Eegon has one that is crazy good. Strategy and speed compete for importance in this frantically paced adrenaline pumping game.

Some days you don’t want to think or listen to your heart pound. On days like that you might be in the market for a fun, stupid and goofy game. Unwind after a long day or a bad night…

Developer Dirty Bit’s Fun Run recalls the cutesy, surprisingly complex, fun of Mario Bros. Bright graphics combine with multiple game levels for fun and competitive play. While you are anywhere in the world you can play simultaneously with up to four players.  You can also pick up items that will help you zap, mangle and otherwise nicely destroy the other players.

Fun Run has an overall store rating of 4.3, and 5 stars are by far the most frequent rating.

If you want to retain a little bit of violence and weapon-based excitement with your goofy game, Muffin Knight will be a good choice. Much like a muffin, the muffin knights are sweet, simple, and dangerously addictive.

Muffin Knight has an overall store rating at Angry Mob Games of 4.4, and again 5 stars are most frequent.

This is really only the tip of the iceberg. You can keep looking for apps that are available for both kinds of devices on Amazon, in stores, and in even more comprehensive lists.