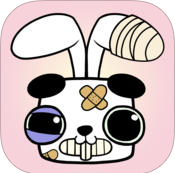 Awesome game. Firstly I just downloaded the demo version but later couldn’t resist purchasing the full game. As it’s packed up with more than 60 tough levels. The game is filled up with levels that never let you get bored or fed up, plus the charming and adorable bunnies make you feel for them and this attachment leads you to get them their freedom from the cruel ringmaster. The more levels I cleared the more interesting game kept on going. The game visuals are perfect and gameplay never lets you get bored. The obstacles you face make you curious.

Another cool feature is the replay video sharing, with adding a Everplay plugin you can share your videos too with friends. The game is interesting as you have to yourself make strategies and think over the moves before you take them. The level of obstacles increase as you go up in levels. The next levels unlock on finishing the last challenge. In game you’ll see a happy meter, quite cute lol. The meter shoes the happiness of bunnies and that’s the core challenge to make these cute abused bunnies happy. Unleash the secrets in game. And don’t forget to catch the treats, you’ll need them a lot in game.

The game consists 4 different environments and bunnies need to their land, you play as the savior in this game who’ll take them to their “Farm Land”. The user has to make magic walls to make the escape easier. The walls have to be designed carefully and thoughtfully. The game contains surprises on each level. The treats too keep changing with number of levels you unlock. You also get chance to fight one on one with the ringmaster and record it. The also consists few smalls games within, and has three different endings. Depends on how you make the strategies and way you play and in the end realize which ending you see. While gameplay you can free other animals too from this caged misery and earn extra points for this generosity and bravery. During the game you can make the bunnies dance, cheer and realize the two dimensions of the world.

The game is designed in Abu Dhabi, Dubai by Hybrid Humans an Indie Studio. The developers has their own website and their contact information available for all. You can also send your reviews to them directly if you really find the game interesting and show your appreciation to them. The developer of the game also worked in UbiSoft Studios for some time. And the team is highly talented.

The game costs you only $2.99 (US Currency). And is available worldwide according the $ rate price. It’s available both on IOS and android. And believe it’s worth the amount. It’s different from other games and not too messy. And you don’t have to beg friends etc. for life’s and bonuses. The game itself is designed in a way which makes the gamer self-sufficient. The game also has multiple language options which consist German, Arabic, English and Portuguese. And updates with time. The game runs on minimum iOS 8 or later versions, and works on IPod, IPhone and IPad. Size of game is about 228 Mb.