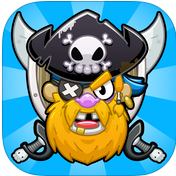 We have seen an incredible rise in jewel in tile-matching games in the past few years (just take a look at the App Store, there are literally hundreds of them), and each promises a unique take on the genre. Jewel Smash falls under a category of game which does not only promise, but actually delivers a fun pirate take on this very popular genre.

Starting off with a fun animation of a pirate on his wrecked ship, the player is immediately put through a very simple tutorial which explains the goal and how to get there. I am not a fan of lengthy tutorials and believe they have no place in mobile gaming, where one plays them during a small coffee break or a train ride home, so having only a few seconds spent understanding the game and immediately jumping into the gameplay was a nice transition.

After completing the first level in under a minute or so and moving onto the second one, the player is immediately presented with an obstacle in shape of crates which prohibit you from moving the jewels around them. The only way to break them is to connect 3 jewels in their vicinity. It’s small challenge, however I must admit it was nice to see a natural learning curve right from the start, and quite frankly this is where Jewel Smash truly shines.

The levels become increasingly harder to complete, however never do they feel unfair, or take too long to compete. It’s refreshing, seeing as many developers tend to overthink, cluttering what seems to be a very simple premise with boring gimmicks or impossible to complete difficulties (which really shouldn’t be the point of a tile-matching game). Oh and did I mention that there are pirates you can battle for some nice loot?

If in trouble, you pirate has a few tricks up his sleeve. There are upgrades in form of power gems, with which you can help yourself move through levels, which can really serve well, especially later on in the game when things get somewhat tougher during the 150 levels.

While playing the game, I also couldn’t help but notice Jewel Smash’s beautiful art style. It reminded me of Donkey Kong and Rayman Legend games with it’s bright colors and fluid animations. The game handles itself very well even on older iPhone generations, but truly shines when played on a retina display.

The sounds are very subtle but contribute to the overall experience. There is the water effect, along with other surrounding which make you feel like you are really stranded on a beautiful island, and the in-level music is very minimal, but I’ve found myself humming the tune long after completing it, so it’s definitely a plus!

All in all, Jewel Smash is a fun addition to the established genre and can be played by different generations. It’s levels are imaginative and fun, very quick and easy to complete, while still offering a nice challenge, especially for the younger audience. It’s art style is very cute and should appeal to anyone even remotely interested in anything pirate-related.’