Kung Fu Master : Are you the Chosen One? 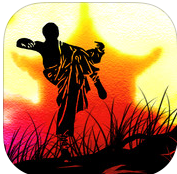 It takes years of practice, skill and determination to learn the art of Kung Fu. Thanks to the popular Kung Fu Panda that we were able to catch a glimpse of the hard work they do, but it’s nothing compared to the actual fire they go through. The Shaolin Temple of China is the most renowned institution where this art is taught. There are hundreds of children going under a well disciplined and very strict training for years that then emerge out as the warriors. When such kind of heroic work is going on, legends are expected to be born at this place. One such legend goes for a man who was a pupil at Shaolin but later broke all the shackles to evade from there. He cleared all the obstacles known as the 18 Bronzemen and crossed the walls. So are you that warrior?

Kung Fu Master is the latest iOS app that has been developed by Jie Shao. The app is compatible with iPhone, iPod touch and iPad and requires iOS 5.0 or any later version of the OS. The app has also been optimized for iPhone 5.

Kung Fu Master is a series of challenges where you fight against different opponents and clear the levels to become the ultimate warrior. But it’s not just a league of matches but a story of success and failure. The gameplay resembles the fights of Tekken where both the opponents stood face to face attacking each other and the last man standing won. The concept is very similar here, just that the story line up has changed. Your opponents will differ a lot from one another and while there are some basic tactics such as kick, punch, defence, etc there are some signature shots as well which can be accessed by clicking at the scroll placed a little below your health bar.

The graphics of the app are obviously very fascinating, sharp and contrasting. The background scenes chosen for fights help to make the grasp of the story tighter. You will feel like you’re caught in the midway of a Chinese institute and you have to defeat all of them to win your freedom. The controls are a bit difficult to understand as it takes the right swipe at the right place to activate a certain attack. But to remedy it out, the developers have provided some tutorials at the start of the game and make sure you go through them or otherwise you’ll already lose half the game.

Overall, the app is very interesting, addictive and the story line up manages to keep its grasp over the players. It’s not the best in the business, but it’s certainly above average and a good time pass. The app is available for free download in the App Store. Make sure that you check out this one!