Less Than 8- More Than Another App! 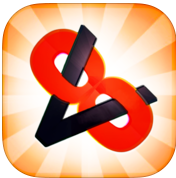 Less Than 8 is a brand new and incredibly challenging puzzle app that was created by Tipasoft. The features included are simple, elegant, and addictive. When I first started the game, I noticed the graphics are professionally presented. The feel and the look welcomes the player into a world where they only have to concentrate on tapping the screen to place their numbers in the proper places. The amount of glitches are practically non-existent which further enhances the overall gaming experience.

Tipasoft has positively went above and beyond in the creation of Less Than 8.

The player can feel their heart throbbing while the timer clicks forward which makes the game even more exciting. If the player is able to beat the puzzle within 8 seconds, they will reach the Grandmaster achievement.

If one is addictive to other number puzzle games such as Sudoku or 2048, they will unquestionably enjoy Less Than 8 on their iPhone or iPad. Less Than 8, I find, is superior when compared to Sudoku being that the player has wonderful features available to them.

When the game is first started, the ease of selecting options enhances the entertainment value. The player has the ability to remove ads and the music is enjoyable but, if they would rather the sounds and animations be silent, the player can mute all the sounds if they so choose. Volume adjustment will also help the player to lower the sounds if they’d like to keep it at a minimum.

As the player reaches higher levels, the difficulty of each level is raised to offer a more challenging experience. Less Than 8 also has one of the best scoring calculations that I’ve ever had the pleasure of encountering. The player will have their mind at ease as they fully give attention to reaching higher levels during play time to accomplish the achievements that they hope to attain. With the game being so addictive, this factor comes in particularly useful.

The scores are saved so that the player can record their top scores. The ability to compare scores with friends and other opponents , who also enjoy puzzle games, in a healthy mix of competition and fun is engaging.

If a player is left-handed, it is also worth noting that when the player starts the game that they can change the mode of their dominant hand. The ability to switch hand-modes comes across as unbelievably clever. The attentiveness of the app creators to include this in the game is appreciated.

Less Than 8 is a game that everyone will surely enjoy for a round of competition with their best friend or worldwide players. The appearance, feel, and simplicity of use in regards to the app is impressive. Not only eye appealing, the creators have taken wonderful steps to enhance the player’s experience as well as offering achievements to do one’s best. If you’re an app user looking for a game that challenges your mind as well as your skills, look no further than Less Than 8 by Tipasoft.