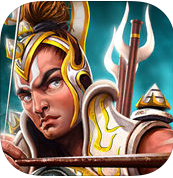 Mahabharata is a grand tale that tells the account of the guidance Lord Krishna gives to Arjun in a war that he does not want to get involved in. The Legend of Abhimanyu revolves around the 13th day of the tale and puts you in control of a chariot. In the game, you become Abhimanyu and have to survive several engagements with opponents in battle to succeed and survive.

Throughout the game, the graphics are stunning and quite rich. Seeing various portraits and paintings of numerous Mahabharata scenes, I feel like LoA has done very well to bring the same depictions to life. It has indeed succeeded in making you feel as if you’re literally there.

After downloading the game, you will come across the typical options that exist in the main menu. It is highly recommended to go to the Options menu first so you can set music, sounds, and screen options before you begin playing. The best part about the game was the How to Play screen, which explained in detail how to move your pieces and chariot. Without the How to Play tutorial, it would be a blunder trying to swipe and tap when some other action was necessary.

You can also reset your data through the Options menu. If you want to start the game all over again or sync your iCloud account, you can use this option.

The gameplay involves shooting arrows, shifting your focus in archery mode, moving your chariot, and swiping to elude arrows coming your way. Every now and then, there is a joystick mode that enables you to drop and roll in different directions; however, this was a little difficult to use.

Even though the entire game only captures one day of the war, it has the opportunity to give gamers hours of the most engaging entertainment, with surprises at every turn. As you get through one engagement successfully, another awaits you to test your skills at using weaponry, techniques, and endurance.

The entire game seemed like a movie since the story line was so good. The character always work hard to make you feel like you were a part of a movie playing the role of Abhimanyu.

Cons
The only criticism of the game that I could find was that it had too many different types of controls. It often became difficult for me to control the several different types of weapons and movements. Sometimes I was swiping and tapping, and at others, I had to just tap once and then tap at several different locations to target my arrows. Because it got too cumbersome at times, some simplicity here would be recommended.

Pros
Apart from that one setback mentioned above, this game is highly recommended for gamers of any age. It is a bundle of challenges that thrill you and build up excitement as you move ahead. Well set as a folk-lore game, the Legend of Abhimanyu will do well to keep anyone busy for hours.