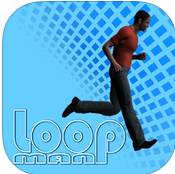 What’s the recipe of an addicting game? Well, if there was a certain answer, then every developer in this world would have been a millionaire by now. But because this very formula isn’t known to everybody makes it invaluable. But this is also true that when a certain app hits the chord with the user base, innumerable number of apps based on the same concept flood the market. These apps are developed with the sole intention to take away some advantage of the original app. They may sustain for a while but only in a short run. Finally, it’s only the original app that survives the race. Today we have one such original piece of creation in our review court. Let’s find out how good it scores on our meter and if it really is a runner of long-run or not!

I’m talking about the latest iOS app called Loop Man that has been developed by von Michael Werren. The app is compatible with iPhone, iPod touch and iPad and requires iOS 6.0 or any later version of the OS. This app has also been optimized for iPhone 5.

Starting with, Loop Man is a running game or more aptly, an endless runner game. You’re playing the role of a rather lazy man (because he’s not fast at all) and maybe this is the factor that adds a pinch of humour as well. The peculiar style with which this man runs is certainly difficult to copy. But even more difficult is to copy your jump every time to perfection. Maybe I skipped two-three points in between. Let me clear them first.

You’re running on an empty highway but there are many obstacles that’ll come your way. These can be a football, a hammer, a pan or anything else. As they come near, you have to jump and avoid them. It might seem easy at first but the moment you take your first jump, you’ll understand what I’m talking about. As the man is not running very fast, the jump almost ends up at the same point from where you took-off. So you have use the speed of the incoming obstacle and then jump accordingly. Moreover, you have to keep collecting coins to get more life. In the end, there are birds flying that’ll attack you. To counter-attack, you just have to swipe your finger in-between them to kill them. If you can manage all these activities at the same time, then the road is all yours!

There are two gaming modes: easy and difficult. It’s better to first hone your skills in the easy mode and then switch to the difficult mode. The graphics of the game are minimal. Though the background picture seems pretty lavish, it’s constant and very much static. Still, the animations are smooth and Loop Man is a simple but addictive game that you can try your hands at.

The app is available for free in the App Store. So grab your phones and get going!