Magic Goals-Messi Edition : Turn Your Screen into a Stadium 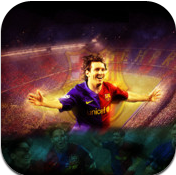 Every game has its own heroes. Be it Michael Jordan for Basketball, Roger Federer for tennis or Sachin Tendulkar for cricket. However there are many debates upon who is the greatest in each of those platforms as there are many great players with their own tricks. But the Football fans though much aggressive do feel to agree upon one thing that the greatest Football player ever is Lionel Messi. The Argentine Footballer joined the game nearly around 17 years of age and has become one of the greatest at 25. His goal scoring ability is still under research but there are no satisfying results justifying his performance.  But being a fan, many of us are willing for a collection of his goals. But what if someone wants to share his own collection with you for $1.99? Want to join him?

We are talking about the new iOS app, Magic Goals-Messi Edition and the title’s enough to tell you how big fan the developer, ZdotFive is of the great footballer. The app is compatible with iPhone, iPod touch and iPad and requires iOS 4.3 or later version. The app is also compatible with iPhone 5. While the app revolves around football and goals, it is not a game. Rather it is a video collection of all the goals scored by Lionel Messi.

When we say that it’s about goals, it truly is. It has all the goals from the shoes of Messi and the developer must have been quite dedicated to the job that well. But it is not easy to find out which one’s your favorite as there are many. So, the app has many different categories to sort out your findings. You can find the goals according to the opposite team, cup/league, year and if you have some direct information, you can search the goal on yourself using the search option. If you have found the right one, you can save it in your favorites list and rank them to your preference.

Apart from the videos, the app also has an in-app quiz available for the Messi fans. So, you can gain some knowledge about your favorite footballer. But the app misses out on some key points. Though you can share the videos on Facebook, any in-app community would have worked best for this type of app. There users could comment on the videos and there should have been an option for the users to upload the latest goals by Lionel Messi. This would have not only kept the app updated for the users, they also would have felt a little more attached to the app with that element of interactivity. What do we have now is a one-time buy kept in a silent corner of your iPhone.

Cons: misses out on Community features, very limited use.