MegaFlux : A True Test for Your I.Q 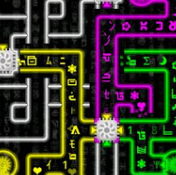 Kids are into all types of games that are fun and entertaining. They are especially attracted to anything which is colorful and flashy. Mind Games have always been welcomed by both parents and by kids. What more can be attractive when the game is a puzzle combined with flashy colors and never ending excitement? MegaFlux is an educative puzzle game which helps to sharpen your kid’s memory and I.Q, the game is designed based on the classic style plumber puzzles where the players have to illuminate the processor by connecting the right colored flux. MegaFlux app has been developed and launched by SoFresh Games for the Android users. The game is compatible with Android versions 2.2 – 4.2.

MegaFlux Puzzle App is perfect for individuals of all ages. The users can get started with the game in a fairly easy manner. All they need to do is to tap on the Nano pipes in order which will turn them on. The player will reach the endpoint when they pieces are placed in the right order. MegaFlux game has more than 50 levels of fun and excitement for the players. The game can be played in two different modes; players can play either in the Relax mode or in the Challenge mode depending upon their mood. They will start with the simplest level and the difficulty will increase as they advance through the game. When they complete each level, the players will learn good amount of information on how to tackle the higher levels. The players can also design their own puzzles. The ‘Community’ level is a new feature that will be introduced in the near future, to make the game more interesting and long lasting.

ü  MegaFlux tests the capacity of the players to the maximum on how they think logically to tackle a problem.

ü  The players will be able to control several Nano pipes through which they can power more than one processor.

ü  The game controls are very simple and straight forward, the real challenge is to connect the pipes as soon as possible.

ü  The players are rewarded with medals and can increase their achievements record.

ü  MegaFlux game has an exclusive feature through which the players can link share their scores in the social platform, made possible by the integration of the game with the Score loop social scoring platform.

ü  The graphics of the game has been designed in a retro arcade game format which makes it look more colorful and vibrant.

ü  The background music is very attractive; the players will hear different sounds for notifications and other achievements during their play.

ü  The game tutorial is very helpful for those who find it difficult to start the game.

ü  The Help option can be used to the maximum by the players to clarify their doubts about the game.

MegaFlux is an addictive game for everyone who lays their hands on this amazing game. This game is available for free download from the Google Store, so download to have long hours of fun and entertainment.

Good – Unlimited levels with options to design your own levels.

Bad – Too much of advertisements.