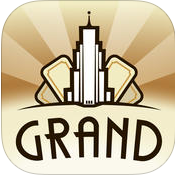 If you are feeling stressed or have some time to waste, Grand Gin Rummy for iPhone and Android is a great way to deal with it. Based on the classic game of Gin Rummy which was created more than 80 years ago, this modern update for the smartphone hooked generation makes the card game more relevant than ever.

Upon opening the app, you are greeted with slick animations and music which puts you in a time machine to 1930s New York.

Not all smartphone users will be familiar with the game, so the app gives you a quick tutorial about the basic rules. The tutorial is very brief and if you don’t pay attention you will end up in a game and have no idea what to do. In a nutshell, you have to collect multiple suits of the same card (eight of hearts, eight of spades etc.) or collect an ascending number of cards in the same suit (for instance, seven, eight and nine of hearts). Keep in mind that the tutorial is by no means everything you need to know about the game. Watching which cards the other player picks up and making a mental note of which cards have been put down are both key gameplay components which you will have to hone through experience.

When you have a general idea of the objective of the game, the app provides various means of play. For those who are less sure of themselves, you may want to get started in practice mode where you will face off against the computer. Note that the game uses a metric called energy which limits the amount of times you can face off versus the computer. This metric replenishes over time or you can choose to pay for more instantly.

When you are ready to dive in and play versus real players, the app offers 3 forms of competitive multiplayer. Quick play which is one round of play – the player that scores higher wins. Classic play which is a game of up to 100 points – whoever reaches 100 points first is the winner. And Oklahoma, the longest game of up to 200 points. Like with practice mode, competitive play requires chips for you to play. You start with a finite amount of chips and depending on the mode, you have to put up a certain amount to enter the game. If you are the winner, you win more chips than you entered with. If you lose, you lose the chips that you entered with. One drawback of this model is that you either have to wait a period of time or buy more chips with real money if you run out. This is typical of card games and most games with in-app purchases, but it something to be aware of.

The app has various means to keep you coming back for more.  The game also offers a ranking system so the better you play, the more you can boast about your skills. Combined with the ease of use and great game design, it is easy to see how players can get hooked on Grand Gin Rummy.