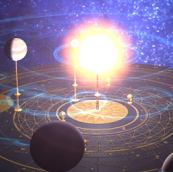 Many of us have dreams to visit all the corners of the world and it takes one’s lifetime to complete it. It can be considered an ideal life if you have visited the entire world because that’s what life’s meant for. But then what will call for an Astronaut who gets to visit our solar system? That’s what I call an adventurous journey. But it isn’t everyone’s piece of cake to get a ride in a space rocket to a place outside of our planet earth. So here we have some models of our solar systems, also referred to as Orrery. An Orrery is a mechanical device that represents our solar system in a confined space. But no matter how good it is, it can never replace the actual solar system or give you a feeling of what it is to be a part of the solar system. So here we have something that can do it.

The app is pretty similar to a mechanical Orrery but far different when it comes to its functions and uses. When you first take a look the Orrery, it appears like a simple mechanical one but has many more details. If you tap on any one of the planets i.e. Mercury, Venus, Moon or Mars, you get to explore their surfaces. Yes! Though it appears to quite fascinating and impossible to visit the surface of a planet on your Android app, but that’s what makes it so unique and amazing. Moreover, you get to view other planets and Sun from that surface which will really make your day. Some of the views like that from Venus and Mars are just unmatchable.

The graphics of the app are breath-taking. They are so much detailed and high quality that most of the devices are incompatible with this app. But if your device is compatible with it, you can consider yourself to be lucky. You can see asteroid fields surrounding different planets as well as you can set camera at any angle to match your view with the perfection. Also, you can set the orbital speeds as per your requirements. Also, this app is informational as you can see details about all the different planets and that soothing music in the background just makes it even more interesting.

The app is available for $1.99 in the Play Store and is a pretty good price for this app. You must have it in your device.