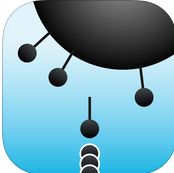 Do you remember spending hours together playing the snake game on the old simple phones a couple of years ago? What if I told you that a new game of that level of addiction is here again? For those of you who like to get those grey cells working and have some time to kill, this game is just what you need. Pins and Needles,an iOS app is what we’re talking about here. Here’s a warning: this game can get addictive… very addictive actually.

The good news is that it is available for free download from the App Store. With an iOS device having 12.4 MB of space and iOS 6.0 or later, you can get started with this game. It is compatible with the iPad, iPod Touch and iPhone. It has been optimised for the iPhone 5 at present. Before you download the game, let me remind you again that this one is truly hard to put down. As challenging as it is, it is equally addictive.

There are 2 simple games in this app- Pins and Needles. In the Pins part, you have to drop pins onto a rotating wheel such that they do not touch any existing ones. In the needles part, you have to drop balls on top of existing needles on a rotating wheel. The minute you place something on an existing needle or touch it, it’s game over. Well, that’s not all. You have to do all this whilst the wheel changes speed and direction and turns in slow motion without any warning. These twists will come in an unexpected manner when you least expect them.

To complete each level, you have to add needles to the wheel. This is the only way to unlock the next level. At present, there are 700 levels to keep you engaged. There’s no way you can get tired of this one. As the levels advance, the difficulty level increases quite fast. Keeping pace with the increasing speed of the wheel and the changes in it can be quite a task. The wheel not only changes speed but also changes direction and alternates.

The key to this game lies in practice and concentration. You need to look for patterns and act accordingly. Taking your eyes off for even a few minutes can prove to be quite fatal to your game. Let the wheel keep spinning until you are ready for it and can begin predicting its movement at least to some extent. Keeping your rhythm will really help you get through this game.

With so many good features, there’s one feature that can be prove to be a huge source of irritation. The free version of the app comes with a lot of ads. These can be distracting and annoying at the same time. To get rid of them, the only way is an in-app purchase, which costs $0.99. Once you’ve gotten rid of the ads, there is absolutely no way you will be able to part with this game.

Good: over 700 addicting levels of gameplay

Bad: Ads in the free version