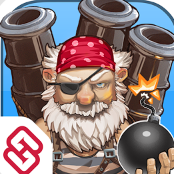 The sea thieves, also known as pirates, have very unique qualities to their character. They are thieves but they never hide from you. You can see their black flag from kilometres apart and you can still do nothing about them. They never sneak into your ship like thieves. They come with sheer force, power and claim whatever is in their territory. I’m not praising them for doing what they do, but after watching movies like Pirates of the Caribbean, one thing was for sure that their lives are very interesting. Looting a ship isn’t like stealing from a house and you need to be well prepared for that. But if you look at the other side, what would you do if you’re living in the middle of the sea and you’re under a constant threat by the pirates? Do you have any strategies? Any plans? If not, prepare them quickly because we’re about to sail!

It’s a story of the Android app called Pirate Legends TD that has been developed by Super Hippo Studios. The app is compatible with all the devices running Android 4.0 or any later version of the OS.

This is a role playing game and as I said, you have a tower in the middle of the sea. Now it’s your job to defend it from the pirates which is actually an organized evil Imperial Navy. So there isn’t a straight solution to get out of the problem. You’ll have to actually send your ships to fight from the pirates. While you can’t control the role of each individual in your army, you can at least decide who the leaders will be and what will be their powers. So you have 5 different heroes with different powers and qualities. So choose and use them wisely to define the attack of your army. Then there you have magicians as well who will leave the other side spellbound. But let me tell you that there are more than 30 different enemies you’ll have to face down in your journey and therefore you’ll have to make sure that you use your heroes and warriors very carefully.

If we look at the problem carefully, finally it’s all about the tower and you have to defend it. So even if you have a very strong army to protect the tower, if the tower itself is unarmed or very simple to infiltrate, then what’s it all about? So your tower must be strong enough to withstand the strongest attacks from the enemies. There are many pirate ships passing by your territory and it’s your job to attack them and take all the loot which you can then use to build your tower bigger and better.

Though the game itself is very interesting and it’s all a fun act, the beautiful graphics of the game just enhance the overall experience to the best. The scenes are breathtaking and the visuals are sharp as well as full of colours. It’s like a festival-on-board.

I really liked this game and there’s no doubt in my mind regarding it. If you have any, then download the game and make it clear. It’s available for free in the Play Store.