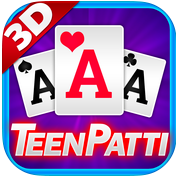 Teen Patti is a popular name in India. You will hear about it on the streets, in the pubs and even in the kitty parties and high glam occasions. It is a game that everyone enjoys; some play it for fun while some play for making some money. It is illegal to play cards for money in India but when it is played for some good fun, no one objects. Today, you have an iTunes app that brings the flavor of Teen Patti in a poker game known as Junglee Teen Patti 3D. Just as the name suggests it is a game for unlimited fun and betting is allowed too.

The rule of the game is one with the highest rank of cards win it. you can bet with the chips that you have and win all the chips. The chips don’t have any real value in cash but if you like the game and you have no chips left, you can purchase more chips to carry on playing the game. The developers of the app have created a casino like environment in order to inject the thrill into it. There are options such as Chaal, Blind, Show and other to make the game even more appealing.

The game of Junglee Teen Patti 3D is filled with features. You can always invite your friends and play with them. There are several game avatars to choose from and the quick Teen Patti games are quite exciting too. You can see the avatar of other people in the game in 2.5D view and your avatar would be in 3D. If you have earned a lot of chips and want to make good use of them then visit the gift shop. Purchase cool images for your friends and gift them. Game chat is also an interesting feature which will eventually help you make good friends.

Good: The display of the game is quite good and the chips are quite cheap.

Bad: There is nothing bad reported about the game as of now.