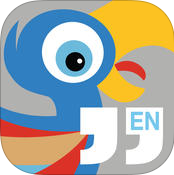 Just like human race has evolved over time, so has the language. So if you think that you were once a master of language in your high school, give it another shot. If you find my words a bit indifferent, just step out of your books and take a look at the world around you. Within minutes, you’ll get familiar with the idea that I’m trying to put inside your brain. I’m talking about phrasal verbs. But the first question is “what are these phrases you don’t know about”? Actually, these are very simple statements that we all use in everyday life unconsciously but haven’t noticed before. As simple as “What’s up!” is a phrasal verb but obviously there are many others and if you haven’t heard them before, you can’t make up their meaning by yourself as these terms defy most of the grammar rules you’d have learned earlier.

If you’re still in doubts on what we’re leading to, then it’s the iOS app called Polly Verbs that has been developed by ThinkMyApp. The app is compatible with iPhone, iPod touch and iPad and requires iOS 7.0 or any later version of the OS. This app has also been optimized for iPhone 5.

Now the second question is, “Why Polly Verbs?” Well, the answer is pretty simple and straight-forward. In Polly Verb, you get to learn 125 new phrasal verbs each day and it’s not over yet. You don’t only get to learn them lyrically but orally as well. You’ll pass on to the next verb only if you’ve cleared the oral test i.e. spoken in the right accent because ultimately, you’re not going to throw notes at each other with these phrases written over them. You have to convey them verbally and you mustn’t sound like an amateur clown who just came out of his circus show.

The in-app Nuance Voice Recognition System would you help track your accent word by word. So if you’re missing the right notes in some specific area, you can focus your attention in that particular zone only. You can bookmark tricky phrases for later revision. The app has been divided into 5 different themes with a easy-to-hard approach so that you can learn progressively.

As long as you don’t get perfect, keep practising; whether alone or you’d like some company of your friends is a personal choice. But whenever you start getting the feeling that you’ve earned the command over these phrases, don’t shy away from boasting your newly equipped skills to your friends by asking them for a one-on-one challenge. But keep a spare expression for defeat, as they’re also learning under the same teacher, Mr. Polly Verbs!

So summing up the entire conversation we had, Polly Verbs is the new-age educational approach to modern language and if you aren’t a part of it yet, you should be!

By the way, the app is available for free in the App Store.

Pros: intuitive UI; 125 new phrasal verbs each day to learn; master your accent; play games with friends and climb up the leaderboard; free.