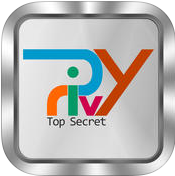 Privy Top Secret is an iPhone application found on itunes apple store. This messaging application works by sending and receiving messages through an encrypted channel. These messages are encrypted as soon as they are sent and in total privacy. This app is not any ordinary application as the privacy is assured. This app is in English and is universal. The version is 1.0 and it is compatible with iPads, iPods and iPhones especially iPhone 5, 6 and other iPhones developed after iPhone 6. In order to use this application on the iPhone or the iPad, the iOS must be 7.0 or any other iOS developed after that. The size of this application is 7.2 megabytes and takes up as little space in the phone as possible.

This application should be given thumbs up as this application has been developed at the right time and the world essentially needed an application like this that assured the users of total privacy when sending and receiving messages.

Currently the world needs this application as through the vast developments in technology the world is in constant completion for power. Currently the country that has power is the country with the most information as in today’s world, the country with the most information also holds the most power. This is the reason why the world as we know is not as big in terms of privacy as it was a few decades ago. A person’s phone message may be hacked and read by a person used to hurt or harm. There have been cases of broken home or loss of job and even broken friendship through lack of privacy when it comes to messages. It has also been a common norm when people read in messages in other peoples phones.

This application prevents all that and ensures there is privacy between the parties communicating. What is more exiting about the application is how easy it is used. There is no much different or any more difficulties when sending and receiving messages. The application is very easy to learn and use. When hiding the text message the user just needs to press the encode part. When the user needs the text shown it’s as simple as pressing decode. There is also a save history part which remains on if the user requires the conversation again or put off if the conversation won’t be needed later on by the user.

Any person who knows how to use a mobile phone will easily use this application. In order to use the application there are no servers needed as most of the phone hacking is mostly done through this channel. A secure encryption is the only thing needed in order to send and receive messages.