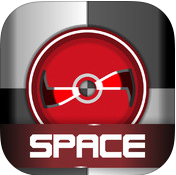 Watching Formula 1 races just makes me wonder if I would ever get the chance to be one of them. I mean who doesn’t want to drive fast cars on wide empty roads with the spectators cheering you up? A chance to drive the best cars in the world is awarded to you. Teams of engineers work day and night to design the best engine for you. This is a dream come true for any passionate driver. But then I think about the constant they pressure they work under to win the grand prix. It’s not easy to keep winning each and every race when each one of you has the same calibre and the same force that pushes him forward. That’s when I decided that first I need to train myself properly and I need the right track to practice. Guess what, I’ve found it!

Racing Tyres Space is the latest addition to the App Store. The app which has been developed by Olivier Parra is compatible with iPhone, iPod touch and iPad and requires iOS 7.1 or any later version of the OS. This app has also been optimized for iPhone 5.

Racing Tyres Space is a high-speed wheel race. But the game is not only about high speed but about some really bizarre tracks. I said ‘bizarre’ for their complexity and because no such track is ever possible in reality. So if you’re able to clear these tracks at such high speeds, you’re definitely eligible to be a part of the Formula 1’s driver cabin. The speeds are as high as 220mph at 60 frames per second and background music will keep you pumped up. So before shifting gears, please tighten your seat belt as we don’t want any accidents on these tracks. Talking about the tracks, they are way too complex and variable. There are many elements that change over course and therefore you cannot fit any of them in a particular category. All of them are unique on their own and that makes the game interesting.

The graphics of this game are very neat and sharply defined. It’s like you’re standing right in the middle of the coordinate axes. Most of the times in these kind of races, you just ignore the background and it plays almost no role. But this time the developer has succeeded to catch some attention. It’s like you can love it or hate it, but you can’t ignore it. The whole game seems like a hybrid design which is yet to come out in the open. It’s stylish, new and I guess that’s all we need.

So overall, I really like this app. You can keep on playing this game for hours and you won’t get bored. I don’t know if you’ll become a Formula 1 driver or not after playing this game, but do you really want to go that way?

The app is available for $0.99 in the App Store. So what are you waiting for?