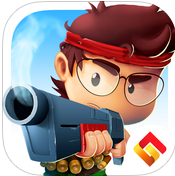 Adventure games have become an all-time favorite by gamers. And with the rise of mobile phones and tablet computers, these action packed games are can now be easily accessed by everyone looking for some exciting entertainment. One of the issues that gamers face when playing adventure games made for mobile device is that these action packed games are not engaging enough, which can be attributed to lack of originality or poor game design. Because of this, a developer group named Genera Mobile created Ramboat.

About Ramboat
Ramboat is an iOS device shooting game that gives players a new level of gaming experience. The game has its similarities with the classic Nintendo game Contra but its twists make it a unique game on its own right. With various characters and game features, Ramboat is an upcoming all-time favorite.

Ramboat Game-play
Ramboat is more than anyone’s ordinary shoot-and-run type of game. First, the main character rides on a running boat (hence, the name), which would require players to avoid obstacles coming their way. Second, players will need to shoot enemies and avoid flying bullets in order to stay alive. Lastly, the players will need to get to their characters destination without running out of lives.

Exciting Features
The game has game-play features that will tickle excitement in its players. These features include the ability to change guns (heavy machine gun, laser gun, single fire machine gun, etc.), collect coins users can use your playing poker (another game feature); equip playing characters with power ups, and many more. Players can choose between 8 characters, 10 vehicles and 10 weapons. The game lets your share your stats and watch gaming replays with contacts on Facebook.

Gaming Visuals and Audio
The gaming environments are similar to premium arcade games but with color combinations that are pleasing to everyone’s eyes. The illustration theme is somewhat light and child-friendly, which gives that relaxing vibe despite the game’s racing and shooting mechanics. Color themes change from stage to stage to keep the visuals fresh and engaging. The game features realistic and clear sound effects that go well with everything that’s happening, and are guaranteed to add more fun to a player’s gaming experience.

Game Difficulty
Playing the game is initially easy, and as players progress, it becomes more difficult. Also, players are faced with different environments and scenarios for each stage and mission. Players also get to increase their military ranks as they complete more missions (the game currently has 84 missions) and win more bonuses along the way.

Who Can Play the Game?
Only players 17 years old and above are allowed to download and play the game. As the restriction implies, the game isn’t suitable for younger audiences. And since the game is an iOS apps, the game can only be played on Apple devices such as iPhone, iPad, and iPod touch running iOS 6.1 or later.

Play Ramboat For Free
If there is another thing that will make Ramboat a public favorite then it would be the fact that it is free to download. This means that all adventure, shooting game enthusiast can enjoy this exciting game without paying a single dime.

Ramboat is a unique shooting game capable of giving players a different kind of gaming experience. The game can be downloaded through iOS’ App store.