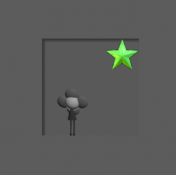 We’re long past the era of Angry Birds and Candy Crush Saga, and it’s actually been a while since the last time a good game with new, innovative mechanics and graphics hit the app stores. Most new games these days are either rip-offs or just don’t hit the bar when compared with the charming, explosive birds or the colorful (and also explosive sometimes) candies. Kaleidospace offers a promising new alternative with its new game RolRollRoll which brings never before seen gameplay mechanics to the table.

“Seem like inside or outside, appear or disappear, chase or be chased, can they really see each other? No, separate from each other?”

The game starts telling you the story of ‘L’ and ‘R’, the main characters that live in a “rolling, spinning world“ and how, despite being very different characters, they ended up having to work together to escape the hole where they got stuck. Your role in all this mess is to help them achieve their goal by solving a series of puzzles throughout the game. With its innovative gimmicks and physics engine, RollRollRoll can take you through a very fun, addictive (and sometimes frustrating) ride of 7 stages with more than 140 different puzzles, set in a very crazy world full of funny aesthetics.

It doesn’t take long for the player to tell RollRollRoll’s gameplay is different from your usual puzzle game. It consists in dragging your finger across the screen to rotate a series of blocks and allow ‘L’ and ‘R’ to go through the puzzles, which may seem simple at first. The real action starts as you advance a little more. Things begin to get crazy and weird as our main characters seem to start defying physics in the struggle to find their path out of the puzzles.

“Crossing while going, slipping while crossing, hanging while slipping, overturning while hanging, falling while overturning, flying while falling” are just a few of the things our characters are forced to perform in order to achieve their escape. As you get to higher levels, the game challenges your creativity adding all sorts of new elements to its puzzles, such as elevators, fluids, pipes and teleportation gimmicks. These force you to use your knowledge of physics to reach the solution in the most complicated stages. Mixing that with all the interactions from the characters guarantees complex puzzles for the dedicated, adventurous gamer, just as it allows for lighter, more joyful levels, so that everyone can have a pick. Not to mention that with its strong physics engine, puzzles feel fresh every time you solve them and it is uncertain if you’ll get the same result twice with the same action.

This game is undoubtedly a unique, fresh approach to the genre, and is set to deliver a nice, entertaining experience to gamers of all ages when it hits the App Store later this year. It is planned to be released on iOS sometime after Flatland: A Romance of Many Dimensions, which is another game by Kaleidospace scheduled for the second-quarter of this 2017.