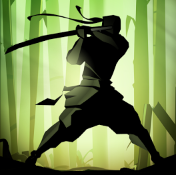 The Android app game Shadow Fight is back, with a big bang. It has long topped the list of favourite action games, charting over 40 million users. The sequel, Shadow Fight 2, is bigger, better and much more exciting. Everything from the graphics to the gameplay to the excitement is top notch.

As the name suggests, Shadow Fight 2 is the story of a warrior hero, comprising of combats between brave warriors who are portrayed as shadows. The animations flow across the screen fluidly, the colours are bright and engaging and the movements almost mimic real life ones. With all this, it is almost like losing yourself in another entirely different world, one full of combative challenges that guarantee an Adrenaline rush. To top all of this, it is free of cost and can be downloaded from the Google Play store for free.

The graphical interface of this app is simply splendid. All the fighters have been implemented solely using shadows, which brings out the clarity of every movement. These shadows stand out against the bright and catchy colourful background, giving the game a classic look. There are hundreds of martial art movements to keep you hooked to the game. The game also allows you to choose a fighter of your choice from a wide range. Besides just the fighters, you can even pick the weapons of combat. The range in both is tremendously exciting.

Shadow Fight 2 has a number of features to which the excitement can be attributed. The first and foremost among them being its creativity, which gives it a unique gameplay unlike any other action game. The action moves are splendid, filling the players with enthusiasm and leaving them wanting for more. There are real martial art moves including jumps, punches, kicks and more.

This Android app offers you 6 different levels to keep you engaged. Each has a unique background and story. There is only one aim to this game- battle and conquer faceless enemies. This, combined with the choice of weapons and characters, is sure to bring a gleam to the eyes of anyone who enjoys action games. Developer Nekki has done a commendable job indeed.

The gameplay is simple and highly intuitive. There are two basic moves- punch and kick. Along with many direction pushes on your virtual stick, these basic moves give you an array of random moves. There are weapons and magical attacks at your disposal too. There is no limit to the available possibilities indeed.

Although many RPG games exist in the market, very few score on both looks and gameplay. Shadow Fight is one of the very few that does well in both of these. The fighting action and fluid moves can be enthralling at times. There is a lack of a social dimension to the game though. Nonetheless, once you get started on the game, it is very hard to put it down. It won’t be long before you lose yourself into the 6 worlds full of excitement. Considering that all this is for free, you cannot miss this app.