Smope – Power to Change your Mood 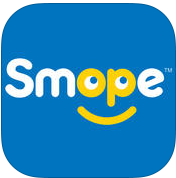 Everyone has days when they feel unhappy or sad. And, that it is perfectly normal, considering the hectic lifestyle people lead. However, when this becomes a recurring issue, it could turn into a life-threatening condition. Many people are battling depression, a very serious illness which could easily take over someone’s life. The bad news is that if left untreated, it greatly impacts on one’s lifestyle, relationships and self-esteem. The good news is that most people can make a full recovery with the right support and treatment. Ruby Taylor, the founder of the Smope app is one of those people. Once she managed to win the battle with depression, Ruby wanted to create something that helped other people get past it too. And, so the Smope app was brought to life. As the founder stated in an interview, the Smope app stands for Smile + Hope. It can be used by anyone who wants to be inspired and motivated every day, no matter whether they are brain injury survivors, postpartum mothers or healthy people.

This app only costs $1.99 on iTunes and is compatible with iPhone, iPad, and iPod touch. It also requires a mere space of 3.6MB and iOS 7.0 or later. The app is very easy to use as the menu has been kept simple and with a clean look. Downloaders can pick their preferred notification time and once opened, the app asks the user to select between 7 and 21 of their favourite photos. The app remembers the choices and these will be shown to the user every day of the week at their designated time. Every picture will be shown together with an inspirational quote below. The photos change from black and white to colour, a way of reminding people that the future will be brighter and better. Also, these must be photos users have on their phone, a way of making them realize the potential these pictures have: to give hope and put smiles on their faces. In order to work, Smope requires unrestricted web access.

Overall, this app is not expensive, delivers exactly what promises and it does not increase the rate at which the battery of the phone or tablet drains. It is easy to use and access and has no complicated options in the menu. Everything is kept minimal and it can be easily used even by the most inexperienced technology user. The device does not lag or freeze during usage. It is efficient and runs smoothly in the background. One downside might be the fact that the only supported language is English. Therefore the user will receive their daily quotes only in English. Another flaw some people may consider is the fact that the users must be at least 17 years old to be allowed to download the app. All in all, Smope is great for getting inspired and staying motivated every day. And, it is all done with the photos that the users already have. Therefore it does not require more add-ons or other related programs to work.