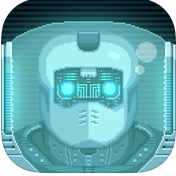 Gaming on mobile phones has become one of the biggest hobbies of youth these days. There are many apps available on app store which are downloaded from app store. If there is any new game app in the market which is interesting available on app store, it becomes the talk of the town. Recently there is one app which is developed and available on iPhone app store becoming a hot topic for youth. Kraus and Boll software developed their second app for iPhone, iPod and iPads with IOS 6.0. They have more than 30 years of experience in video game development. It is a 2D science fiction game called StarDroid 1.0 version.

It is based on interesting adventure space shooting where the robot’s mission is to shoot the spaceships which keep drifting in the space in a uncontrolled passion and creates galaxy traffic chaos. The game has 5 spaceships which needs to be destroyed and each one has eight decks. The robot has to board the spaceships and destroy them and keep moving freeing his way by placing bombs and clearing the obstacles. It easily gives more than 6 hours of entertainment and often it is quite difficult for the player to reach his goal.

To destroy the spaceships and reach the fifth spaceship reactor needs many coins, key cards, hidden rooms and many more to survive and move on, in the game. The coins can be exchanged to buy extra features and extra lives. Once the player reaches the reactor he needs to defeat the commander of the spaceship and place a bomb to destroy the it. Altogether it is a well-developed science fiction game which is not only entertaining youth but also adults of all ages. This game not only requires gaming skills but also some logic to move to the next level. The game is designed in extremely interesting way and glues the player to his app. The pixel art used adds more professional look to the game.

Playing the game is really simple and easy for anyone to get the hang of it. Once they get used to exploring the game, it is not easy to quit for sure. The game can be controlled using simple controls. The mood of the game is carried until end and the adventurous way of exploring the way to the reactor keeps the player in game spirit. It’s a mix of adventure, action and exploring. It has good story line and conversations. It actually makes the player travel to a different adventurous world. Player experiences excitement in exploring the space and reaching his goal to find the reactor on the space ship.

Today’s youth prefer adventurous Science fiction games and if it is a game based on space adventure, they would love to try it. The game is priced for $2.99 for iPhones and is available to buy on App store and coins can be purchased for extra price using which the player can buy added extra features from the App store.