Swipe Fighter Heroes Is A Warrior App for The Ages 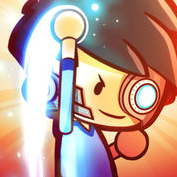 Beat ’em ups have been around almost as long as the medium of video games itself. Sega’s monochrome boxing title Heavyweight Champ is considered to be the first example of the genre, released way back in 1976, and since then, fighting games have dominated game charts through the decades. Classic series like Tekken, Mortal Kombat, Super Smash Bros. and Street Fighter are all beloved staples in the pantheon, and a few have even made the transition to smartphone, with varying results. But with the release of Swipe Fighter Heroes, out now in the App Store and Google Play, app developers are making their bid for the top of the fight game genre.

The first thing that hits you about SFH is that it’s designed specifically for smartphones. It’s not some clunky port of a pre-existing fighting game, nor is it an effort to cram traditional fighting controls into the restricted space of an iPhone screen. Instead, it’s an ingenious take on the touchscreen medium; as opposed to hitting buttons to perform moves, players simply swipe their fingers in a variety of shapes. A linear swipe is a punch, a diagonal swipe is a kick, vertical is block, and a host of different squiggles constitute different special moves. This nifty little mechanic takes a couple of attempts to get the hang of, but once you do, it quickly becomes addictive and extremely gratifying.

The graphics of SFH also deserve a mention. They are gorgeous rendered, and it’s immediately apparent a lot of time and work has gone into their design and execution. This is also evident in the game’s fluid, involving play-style. As well as the graphics, a lot of thought has been applied to the customisation options, which are numerous; you can unlock everything from characters to weapons. You can play as ninjas, wrestlers, samurais or street fighters, and utilise a number of alarming weapons to impose maximum damage on your opponent. And these opponents can come from anywhere in the world; by signing up to the global network, you can fight anyone, anywhere, anytime, and set about proving your Swipe Fighter Heroes worth on the world stage!

A nifty recent update also proves the developers have their finger on the  political pulse; it sees leftwing journalist Anderson Cooper take on the mother of all clowns, President Donald Trump. So if you ever wanted to smack the buffoon President in the face, or indeed clobber the leftist media for their increasingly rigid and patronising ideology, then look no further than Swipe Fighter Heroes, and Make America Game Again!