Taffy Bounce – Bounce to save the Kingdom of Candy Prince 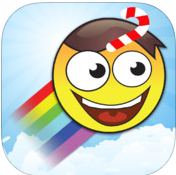 A simple game with loads of fun involved in it. It’s a game for kids to cherish about collecting the cadies. This game has a centric hero who is referred as Candy Prince. The main idea of the game is to save the kingdom of candies by bouncing the Candy prince to achieve his goals of collecting wonderful candies. The game theme might look simple but it’s really interesting when you start playing it. Every kid loves candies and if you put the cadies in the form of game then it’s a win-win situation, that’s the strategy behind this game. As the game name states you will find lot of taffy candies in this game and your target is to make the candy prince bounce and collect all the taffy candies.

There are some boosting factors which will help you travel fast across the taffy kingdom like rainbows, birds and even the line you draw also has some impact in the speed of candy prince travel. If you make the candy prince hit by a bird then the candy prince will travel on the bird in lightening speed and it skips few distance which will give you boost points. But make sure you avoiding the prince from falling down when the bird drops the prince. Sometimes it drops very fast and there is a huge chance that prince may fall down, so you should be cautious enough while traveling on birds.

The music of the game suits well and even the animation of the game during each action changes which are really attractive in this game. For example when the prince steps on a detonator his reaction in his face changes, when he travels on birds his eyes becomes bulgy and it looks lively. Once you start playing this game you will never stop it, this game is more addictive even for adults. If it’s the case for adults the I don’t need to tell about kids. Everybody will love this game as it’s available just for $0.99 in iTunes store. It’s a good investment to keep your kids busy and free from disturbing you. I would say it’s a best time killer currently available in iTunes app store for kids.