Take Challenges in the Sky with Highway Chase 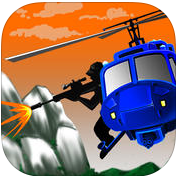 How would you feel if the control of a fighter helicopter is in your hand and you are chasing thief cars to destroy them? While it may not be possible in the real life, you will surely not miss the thrill if you download and play Highway Chase from iTunes. This is an action based shooting game where you have to play the role of the pilot policeman, and required to destroy the thief cars beneath. It is a fun game to play and there are lots of attractions to look forward to.

Highway Chase, presented by Rise Up Labs, is a free game on iTunes that provides you a lot of options. It is a timer based game where you have to complete the mission within a stipulated time. You have to aim as you move and have to shoot the cars, but at the same time, you will have to avoid civil cars and pedestrians. Each shot will fetch you points in the game and when you take consecutive risky shots you will gain bonus points for sure. Be as fast as possible and complete the mission. While the beginning levels are going to be easy, the higher levels are going to be quite tough as leaving the civilian cars will be difficult in those stages. The game requires skill but that skill can be acquired as you start playing the game.

Summary: Highway Chase is the game for game mongers and casual players where the player will be given the responsibility of shooting at the thief cars.

Good: The game has a great visual which is attractive and innovative and the sound of the game is quite thrilling.

Bad: The game has received 5 star rating, so there is nothing bad.