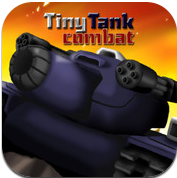 Are you tired if memory and strategy game? Are you looking for familiar games to kill time? Do you require a game that soothes and comforts you leaving you in your comfort zone? Tiny Tank Combat is the latest game on the block. It is a classic game that has an interface in a retro style where the player is running through rugged terrain dodging bullets from the enemy and at the same time trying to shoot them down. This game puts you on a high alert mode while increasing your defense tactics.

Tiny Tank Combat is a free game brought to your door step by Hadi Pintarto and AppStore for all those people reminiscing about ‘gaming those days’ and wanting to bring back the classic video gaming on their new smart phones.

This game is an outstandingly addictive game that can interest intelligent and not so intelligent players. It caters to the primitive instinct of survival of the fittest. Also this game is a multi player online game that makes it even more interesting. Its intelligence level is internally modified as per the players’ skill.

This game makes you feel very 1990’s especially for those of you that may always be on the lookout for latest technology apps. After a certain point in time this game might start getting repetitive. Though there are changes like level upgrades and weapons upgrade, the same old terrain and game play may not catch your interest for a long time.

Tiny Tank Combat is an energetic, new age, classic game that can hook you for hours together. Whether you are on the go or stuck in traffic, this retro game is the one to up your spirits by its sheer simplicity. For best results, try out this game on your iPad (for its maximum screen area) though iPhone or iTouch is not a bad choice either. So don’t miss out on this retro gaming and get it installed on your phone for your primitive gaming sense.