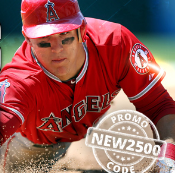 Playing real money poker on your iPhone, iPad or Android in the United States can be challenging due to U.S. gambling laws like the Unlawful Internet Gambling Enforcement Act of 2006.  Thankfully there are still a few U.S. facing online poker rooms that offer cash games on iOS or Android devices. When choosing a mobile poker app there are lots of different factors that go into deciding which one is right one for you. What games do they offer? How’s the interface? Do many people play there? Is it easy to deposit? Can I download the app from the iTunes App Store or Google Play. To answer these questions, we’ve tried out all the biggest US-friendly real money poker apps and compiled a list of the top three sites for you to try out.

Ignition Poker is the most popular United States friendly real money mobile poker site. In this regard, it’s as close as you are going to get to a successor to PokerStars or Full Tilt. The player pool is large, the interface is intuitive and looks great, and the cashier is extremely fast and reliable. It’s most notable feature is Zone Poker, a fast-fold poker variant which immediately deals you into a new hand once you’ve folded. If you used to play Zoom Poker on PokerStars, you’ll find this very familiar, as it’s essentially the same thing. What’s great about it is that it allows you to significantly increase your hand volume without having to juggle an obnoxious number of tables. Even if you’re not a grinder, it’s a ton of fun as you’ll get dealt strong hands all the time.

All first deposits are automatically matched 100%, no bonus code required. Ignition also has a cash game poker app, which is largely the same as the desktop app, available to play via the browser of any Windows Phone, iOS or Android device.

BetOnline have recently launched their own U.S. friendly real money mobile poker software. From what we’ve seen so far, it’s by and large a similar experience to what Ignition offers. The in-game interface has a similar minimalist look, albeit a bit more traditional, and the cashier is just as fast and reliable. Unlike Ignition, BetOnline offers fully-customizable hotkeys which is a useful feature if you plan to multi-table. While it doesn’t have its own fast-fold poker variant, it does offer a comprehensive suite of game types and formats. No-limit Hold’em tournaments run frequently, some with large guarantees that attract hundreds of players. Cash games are available in No-limit Hold’em, Pot-limit Omaha and Pot-limit Omaha Hi-Lo, both full-ring and 6-max. If you play at one of the bad beat jackpot designated tables, you have a chance at winning a portion of the bad beat jackpot which usually stands at between $100,000 and $500,000. To be eligible, you have to be dealt into a hand in which quad jacks or better are shown down and beaten.

BetOnline poker for iPhone, iPad, Lumia and Android is browser-based so you won’t find it in either Google Play or the Apple App Store on iTunes.

If you’re looking for a bitcoin-based real-money poker app, look no further than Nitrogen Sports. Initially just a sportsbook, Nitrogen Sports recently branched out into online and mobile poker and now offer what is arguably the best bitcoin poker experience available to United States players. The interface is of the same quality you’d expect from a conventional big-name poker site, and, because it uses bitcoin rather than regular currency, it’s arguably a safer and more secure way of playing poker in the United States of America.