Train your Ninja to Float High with Nijaflated 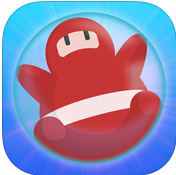 There are several gaming characters which have provided unlimited fun to the kids as well as the adults. Ninja is just one of them and it has been able to bring laughter on faces. There are several ninja games over the web, some quite interesting and some not. Here comes a ninja game on iTunes named as Ninflated which is fun, interesting, and easy to play but quite difficult to master. It is a short game which does not have episodes but you will definitely love to see how much you can score in the game.

Ninflated, presented by Appstreet Games Ltd, is free game for iTunes users and it has only one logic. You have to float as long as you can and as up as possible. Simple dragging gesture can be used to help your ninja move and you can also tap your way through the ninja training tower. You are actually making your character know how to float without hitting the ceiling and once you touch the ceiling, the game is over. There are some inverted levels in the game which makes it even more interesting because in those levels the control will be opposite. Just play the game with your friend and see how much you can score.

Summary: Ninflated is a free game on iTunes where you have to try your skill to float as up as possible with the action of dragging and tapping. There will be obstacles in the game which you will have to cross with your control power.

Good: The visuals of the app are quite cool.

Bad: Though the app is cool to play it loses the versatility which is required in such apps.